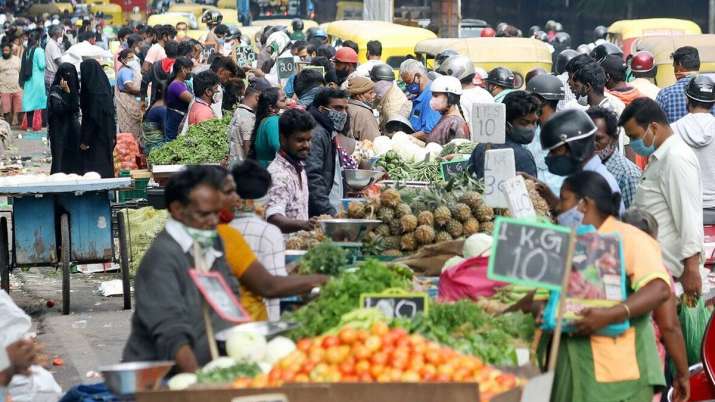 Wholesale Price Index (WPI)-based inflation shot up to a record high of 15.88 per cent in May from 15.08 per cent in April, according to government data released on Tuesday.

Rising prices of food items and crude oil pushed the WPI inflation to a new high in May despite the government resorting to calibrated efforts to check the prices. This is the 14th consecutive month of double-digit inflation since April last year. In the corresponding month last year, the WPI inflation was 13.11 per cent.

The WPI-based inflation at 15.88 per cent is the highest print on record in the current (2011-12) series, according to a PTI report. Considering the old series as well, the last time WPI inflation was higher than this was in August 1991, when it was at 16.06 per cent.

“The high rate of inflation in May 2022 is primarily due to rise in prices of mineral oils, crude petroleum & natural gas, food articles, basic metals, non-food articles, chemicals & chemical products and food products etc. as compared to the corresponding month of the previous year,” the Commerce and Industry Ministry said in a statement.

Inflation in food articles in May was 12.34 per cent, as prices of vegetables, wheat, fruits and potato witnessed a sharp spike over the year-ago period. The rate of price rise in vegetables was 56.36 per cent, while in wheat it was 10.55 per cent and in egg, meat and fish, inflation was 7.78 per cent.

In the fuel and power basket, inflation was 40.62 per cent, while in manufactured products and oil seeds, it was 10.11 per cent and 7.08 per cent, respectively. Inflation in crude petroleum and natural gas was 79.50 per cent in May.

Meanwhile, retail inflation eased to 7.04 per cent in May from an eight-year high of 7.79 per cent in April this year, according to the data released by the National Statistical Office (NSO) on Monday. However, the figure of 7.04 per cent remains above the Reserve Bank’s inflation target for the fifth straight month.

To tame stubbornly high inflation, the RBI has twice hiked its key interest rate by 40 basis points and 50 basis points in May and June, respectively.

READ MORE: RBI much ahead in containing inflation: SBI report