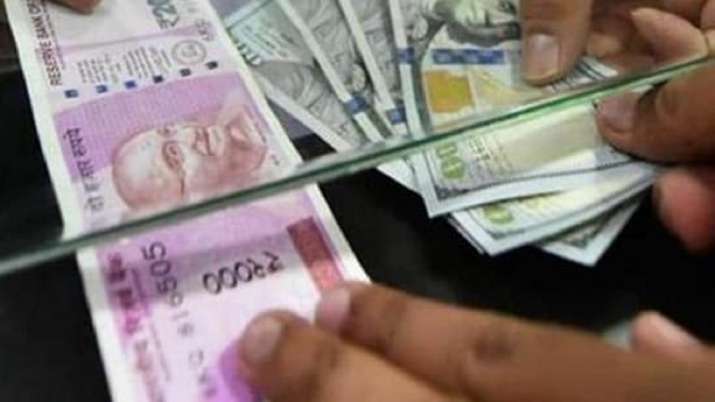 Rupee nears 80-mark against Dollar: The rupee edged closer to the historic low of 80-mark against the US currency on Thursday as it declined by a little over 18 paise to settle at 79.9975 amid a stronger greenback in overseas markets.

While wholesale inflation remained double-digit for 15 straight months to June, expected deterioration in the country’s current account deficit and forex outflows dragged the local unit near to the psychological low level of 80 against the greenback.

A sharp correction in crude oil prices in the past few days, however, has been a breather for the local currency, analysts said.

At the interbank foreign exchange market, the rupee started the day on a strong note and touched a high of 79.71 to a dollar in early trade. The local unit lost momentum after the dollar surged to 24-year high levels against a basket of global currencies in the early European trade.

Some of the leading banks such as SBI were already quoting above 80 levels for selling the US dollar.

Wholesale price-based inflation eased to a three-month low of 15.18 per cent in June on a sharp decline in the prices of minerals, but food articles continued to remain costly.

June is the 15th consecutive month when the wholesale inflation remained double-digit. Last month, it touched a record high of 15.88 per cent. In June 2021, it was 12.07 per cent.

A finance ministry update stated that India’s current account deficit is expected to deteriorate in the current fiscal on account of costlier imports and tepid merchandise exports.

To meet the financing needs of a widening CAD and rising FPI outflows, forex reserves, in the six months since January 2022, have declined by USD 34 billion, it said.

“The Indian rupee becomes the median performer among the regional currencies. The rupee closed at a record low for the fourth day in a row amid safe-haven demand for the dollar after US inflation surged to a 41-year high. The rate markets now are pricing aggressive rate hikes from Federal Reserve which supported the dollar,” Dilip Parmar, Research Analyst, HDFC Securities, said.

Spot USD/INR delayed the level 80 in today’s session but is expected to break in the coming days. The pair has resistance at 80.90 after crossing 80 while the support shifted to 78.80 from 78.50, he noted.

“Rupee continued to remain under pressure as the dollar rose sharply against its major crosses. Today it fell to fresh all-time lows against the US dollar. Market participants remained cautious ahead of the (US) inflation number that was released yesterday. Data showed year-on-year consumer price growth accelerated to a scorching 9.

This fuelled speculation that the Federal Reserve will raise interest rates even more than the 75 basis points previously expected. We expect the USD/INR (spot) to trade with a positive bias and quote in the range of 79.40 and 80.00 in the short term, he added.

“The aggressive policy course by the US Fed to curb rising price pressures is exacerbating fears of a weakening growth outlook and leading to risk aversion in the markets,” Sugandha Sachdeva, Vice President – Commodity and Currency Research, Religare Broking Ltd said.

“Besides, we have seen a relentless rise in the dollar index, while the euro has been hit hard as it tumbled below parity against the dollar for the first time in almost 20 years. Europe is grappling with an energy supply crunch owing to sanctions on Russia that make it more susceptible to recession risks.

“This has led to a big moment depicting strength in the greenback as markets are expecting the US Fed to raise rates way more swiftly than its peers,” Sachdeva said.

The dollar index, which gauges the greenback’s strength against a basket of six currencies, traded 0.3 per cent up at 108.58 as it moved to near parity with the Euro.

Foreign institutional investors turned net buyers in the capital market on Thursday, as they bought shares worth Rs 309 crore, as per exchange data.

ALSO READ | Rupee drops 9 paise to hit lifetime low of 79.90 against US dollar

SpiceJet flight flew into squall while 3 others deviated left & right