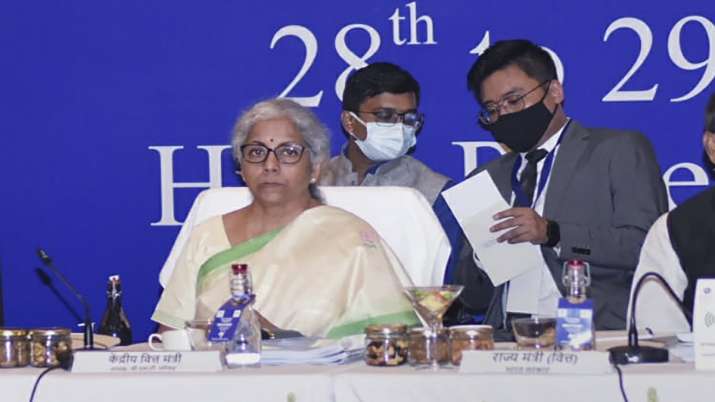 The GST Council on Tuesday approved changes in tax rates on some goods and services while allowing states to issue an e-way bill for intra-state movement of gold and precious stones, officials said. The Council, chaired by Finance Minister Nirmala Sitharaman and comprising state counterparts, also cleared a host of compliance procedures for GST-registered businesses along with a GoM report on high-risk taxpayers to check evasion.

The discussion on the crucial issues of extension of compensation to states beyond June 2022 and the imposition of 28 per cent GST on casinos, online gaming and horse racing, will take place on Wednesday. Opposition-ruled states have been pressing for either extension of the GST compensation regime or increasing states’ share in revenue from the current 50 per cent.

In the meeting on Tuesday, the Council accepted the interim report of the group of state finance ministers, headed by Karnataka Chief Minister Basavaraj S Bommai, on rate rationalisation, including correction of inverted duty structure and removing a tax exemption on some items, to simplify the rate structure.

The GoM had suggested withdrawal of GST exemption on a host of services including on hotel accommodation of less than Rs 1,000 per day and replacing it with a 12 per cent tax. It also recommended a levy of 5 per cent GST on room rent (excluding ICU) charged for hospitalised patients where the hospital room charges are above Rs 5,000 per day.

It wanted all post office services other than postcards and inland letters, book posts and envelopes weighing less than 10 gm, to be taxed. Also, cheques, loose or in book form should be taxed at 18 per cent, as the GoM recommended. The GoM favoured withdrawal of exemption given to renting of residential dwellings by businesses for residential use.

With regard to the e-way bill on the intra-state movement of gold, jewellery and precious stones to check evasion, the Council recommended that states can decide on the threshold above which the electronic bill is to be made mandatory. A panel of state ministers had recommended the threshold to be Rs 2 lakh and above.

SBI Customers ALERT! Bank Asks Not to Take Calls From These Numbers; Know Why